Morton travelled north in one of two Friday night fixtures to take on Inverness. Inverness scored on the brink of half time, before routing the away side with another four goals in the second half, confirming a 5-0 defeat for the Greenock side. The two teams clash again on Saturday in the Tunnocks Caramel Wafer Challenge Cup.

Dundee United stayed top of the pile with a thrilling 6-2 win over rivals Dundee. The Arabs showed their clinical side, converting 11 shots into 6 goals, with five different goalscorers. Former Morton striker Lawrence Shankland was again among the goals, netting from the penalty spot in the 36th minute.

Partick's turbulence off the pitch was compounded as they lost 3-2 to Ayr. The Jags led 2-1 at half time, through goals from Stuart Bannigan and Shea Gordon. Both goalscorers were subsequently red carded as Ayr found a way back into the match. Partick legend Kris Doolan netted an equaliser before Ayr took the lead through Stephen Kelly.

Arbroath claimed their second win on the bounce at home to Dunfermline. Former Morton loanee Luke Donnelly gave the Angus side the lead just after half time. This goal proved to be the difference as Arbroath moved into fourth place.

Queen of the South are still searching for their first win as Alloa claimed a precious away win in Dumfries. Former Morton man Alan Trouten continued his rich vein of form, netting the only goal of the game. Queen of the South struggled and failed to register a single shot on target.

Ahead of the international break and Challenge Cup weekend, here's how the Championship table looks; 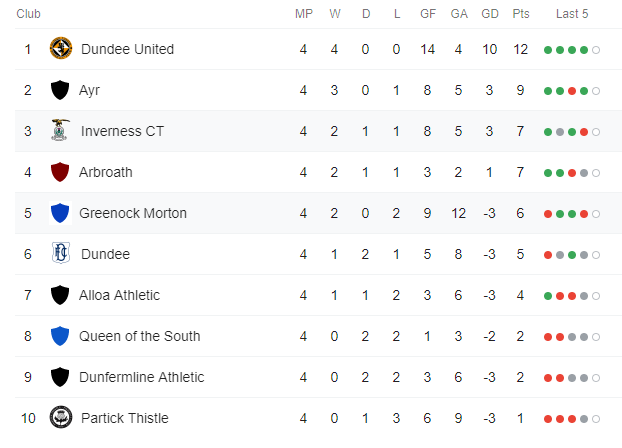 Back to General Morton Chatter
Reply to quoted posts     Clear