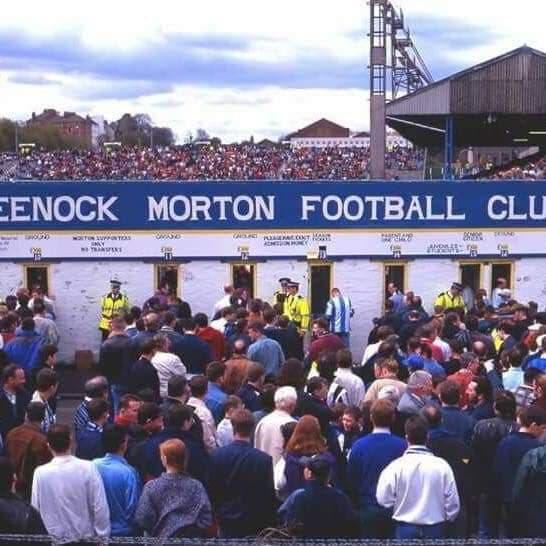 Twenty-five years ago, today. Where has the time went? For Morton fans of a certain generation, the team of 1995-96 were perhaps the first, and possibly the last we fell in love with. And that fantastic season ended in the most heart breaking of fashions in that final day head-to-head with our illustrious, big spending opponents Dundee United at Cappielow.

Morton's 1995-96 Season
It's a season I remember fondly- my first as a season ticket holder and off the back of immediately bouncing back into the league after relegation to the Second Division. Watching Morton was a joy that season- we had some fantastic victories over the likes of St. Mirren (4-1 at Love Street), St. Johnstone (4-0 at Cappielow) and eventual champions Dunfermline (2-0, both home and away).
There were of course moments in which we were reminded which club we support, such as the calamitous Scottish Cup exit at Montrose in which David Wylie was sent off, resulting in Andre Boe's appearances at Tannadice and East End Park which may well have ultimately cost us. Two home defeats by a pretty rotten St. Mirren team, a 6-1 doing at fellow challengers St. Johnstone, Chic Charnley's wonder goal condemning us to defeat by a Dumbarton side who only picked up 11 points all season and a late defeat at Clydebank a week after teaching St. Mirren a lesson in that fantastic win at Love Street.
But this team had a resilience about it in the face of adversity. Warren Hawke's scoring streak helped us up the table early on before the goals dried up mid-season, but still the team dragged themselves through. The sale of Derek McInnes to Rangers for a paltry £230,000 in November was a terrible blow, but a week later we went to the Pars and took care of them without a problem. We could win ugly, too- January in particular was a tough month, with 1-0s against Dundee at Cappielow and Clydebank at Kilbowie, before most memorably Peter Cormack's late strike at St. Mirren gave us a single goal victory that is still warmly remembered to this day. Even after the week from hell in which we went to Tannadice and East End Park, conceding 8 and picking up only season-ending injuries to Alan Mahood and the peerless Janne Lindberg, the now depleted team still refused to lie down and fall out of the title race. I've got fond memories of a 4-1 comeback victory over Hamilton in the run in and Rajamaki's controversial late equaliser against Dunfermline at Cappielow. After dropping more points in a frustrating 0-0 draw with Clydebank in April, one of the challengers had to fall on the third last day when St. Johnstone came calling. It was Morton who would remain in the hunt, with Dougie Johnstone's first half goal settling the most nervy of affairs. 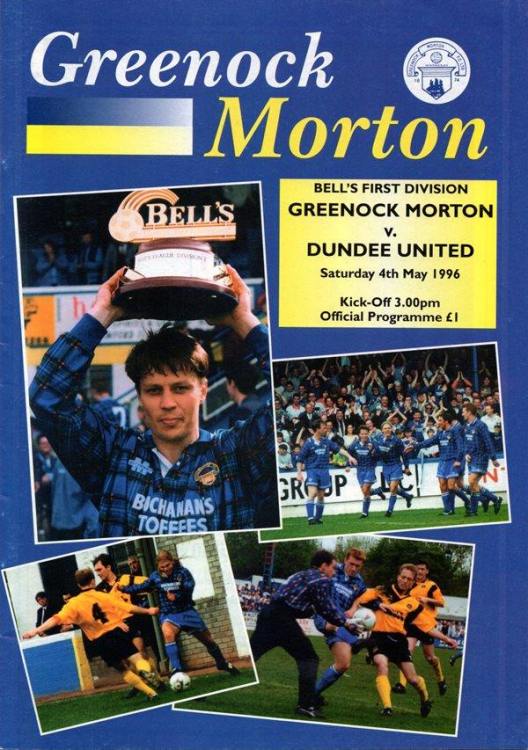 (Photo- www.arabarchive.co.uk)
Scene Setter
Both teams went into the match on 66 points, two behind Dunfermline, who were at home to a notoriously awkward Airdrie and needed a win to confirm themselves as champions. This was after the Pars had gone to Tannadice and beaten the title favourites 1-0 to put themselves in pole position. Meanwhile, Morton followed up that 1-0 win over the Perth Saints with a nerve-racking single goal success at Boghead against the long since relegated Sons, thanks to John Anderson's goal on the stroke of half time.
I recall turning up at Cappielow around 12pm on the day of the game, expecting a big crowd, and was one of the first outside the season ticket gate, not getting into the ground until around 2.30 as every other gate was opened beforehand. When eventually I did get in, the atmosphere was electric, as an official crowd of 12,523 gathered with hundreds, possibly thousands others locked outside. I suspect the crowd was nearer Cappielow's 14,267 official capacity of the time, if not exceeding it. 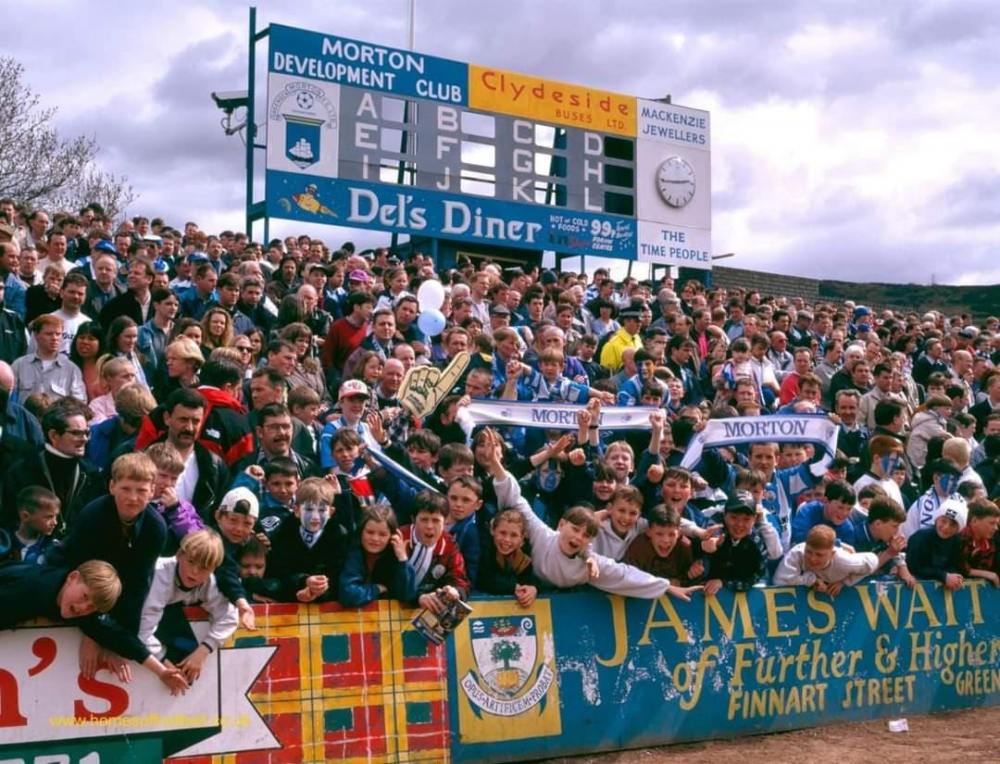 (Photo- Stuart Roy Clarke, www.homesoffootball.co.uk)
The Match Itself
Morton started the match nervously, with United creating the best chances- a Robbie Winters volley being forced out by Wylie before, from the resultant corner, Brewster stung the Cappielow custodian's palms with a rasping drive. An Andy McLaren strike was deflected wide before Morton created their first meaningful opportunity- good work from Derek Lilley and Marko Rajamaki would let in Warren Hawke, whose fine strike was blocked by Ally Maxwell, before Lilley's typically robust challenge saw him enter Hugh Dallas's book.
United were to take the lead on 16 minutes, as Craig Brewster's corner caught the 'Ton defence napping and Brian Welsh nipped in to head the Terrors into an admittedly deserved lead. United continued to dominate- a tame Christian Dailly effort was easily collected by David Wylie, but Morton came to life somewhat, with Steve McCahill heading a Rajamaki corner into the gloves of Maxwell. Wylie again collected a weak Brewster attempt before Morton's best chance of the half, as Maxwell got across to claw away Hawke's goal-bound header. As the half time whistle blew, it was all to do for Morton going into the second period.
But we were to come out the traps in the second half, and on 53 minutes, we got our reward, albeit fortuitously.  Rajamaki won a corner after a good move down the left and the Finn's outswinger was headed home at the near post by Dundee United striker Brewster. Cue bedlam on the terraces. 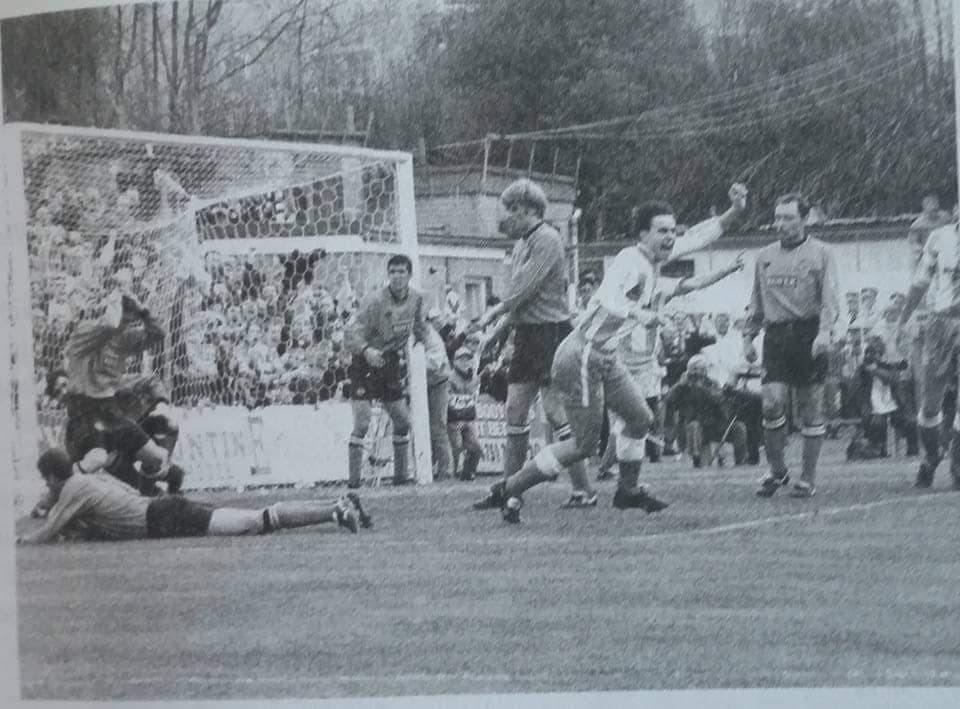 (Photo- original source unknown)
But the joy was to be short-lived, as the Arabs went straight up the park and re-took the lead almost immediately. A simple route-one free kick was nodded onto the unmarked Winters who converted with ease to put them right back in the driving seat. Try as they might, it looked like Morton weren't getting anything from the game, as Rajamaki skewed an effort from an indirect free kick inside United's box wide of Maxwell's upright, and Derek Collins' mazy run only just failed to achieve the desired outcome as he also put his effort agonisingly wide. As time ran out and Morton began to throw bodies forward, Winters was unlucky not to extend United's lead as they broke at pace following Rajamaki's cleared corner. News of Airdrie's equaliser in the Kingdom filtered through on transistor radios, in these days before FlashScores and it was the visiting supports' turn to really celebrate as they began to sense the trophy was heading to Tayside after all. But their joy was also to be brief, as they were hit by the double whammy of Marc Millar's penalty winner for Dunfermline and Marko Rajamaki's dramatic equaliser 8 minutes from time at Cappielow. Game on, and yet more pandemonium in the Cowshed. Craig McPherson's long diagonal was majestically headed down by Lilley onto the left foot of Rajamaki, who finished in style.
Alas, it wasn't to be, and a last-minute Brian Reid header which dropped over the bar was our only moment of note as we tried for the win that would've delivered a second placed finish and a play-off with Partick Thistle. United would go on to win that play off in dramatic fashion- equalising in the final minute of normal time before Owen Coyle clinched a place in the top flight, where they remained for the next 20 years.
The Aftermath
So, where did we go from there? To say that day was a sliding doors moment in Morton's history would be an understatement in my humble opinion. We could've gone down immediately from The Premier Division for all we know, but that Dundee United team we ran so close went on to finish third behind Rangers and Celtic, and qualified for Europe. The Bosman rule was in its infancy and we would soon lose Lilley in a £500,000 move to Leeds, and Mahood, Lindberg and Rajamaki under freedom of contract.
Morton wouldn't threaten the title race the following season, and after that were bought over by Hugh Scott- a development that would've been unlikely to happen to a top flight club. With Football Trust funding available, we may also have seen the redevelopment of Cappielow, rather than its neglect over the last generation or so. The re-emergence of Celtic as a force in the top flight at that time made that division a more interesting place to watch your football, and it could be argued that we lost a generation of young fans to Glasgow's big two. We'd never have competed with Rangers and Celtic, but would it have been too much to ask to think that we'd have fared better on a more level playing field with clubs we saw back then as our equals, such as St. Mirren, Kilmarnock and St. Johnstone? Would Ross County, Inverness and Livingston have taken their places above us in Scottish football's foodchain so easily? With the formation of the SPL and the riches that brought, would we have been in a position of strength had we been on the inside looking out at those poor paupers below?

We'll never know the answers to any of those questions, but what we do know is that we've suffered ever since, admittedly due to our own poor decision making as much as any external factors. What is for sure though is, we'll be unlikely to see such an incredible occasion any time in the near future.

Thanks to Chris McNulty for supplying the photos and to Leon Mooney for the match highlights. Thanks also to www.arabarchive.co.uk and homesoffootball.co.uk.