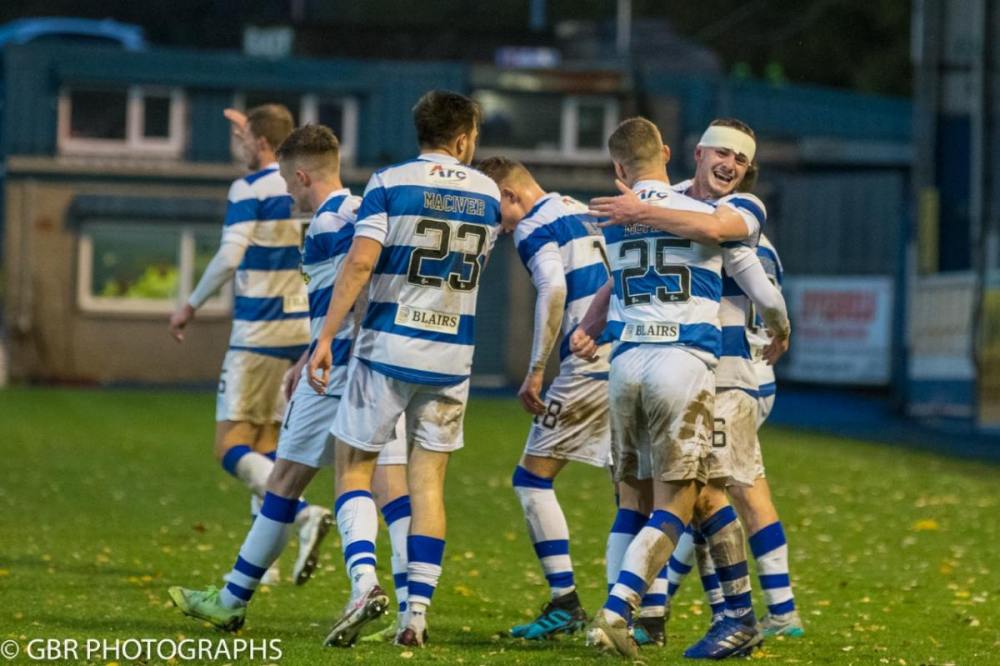 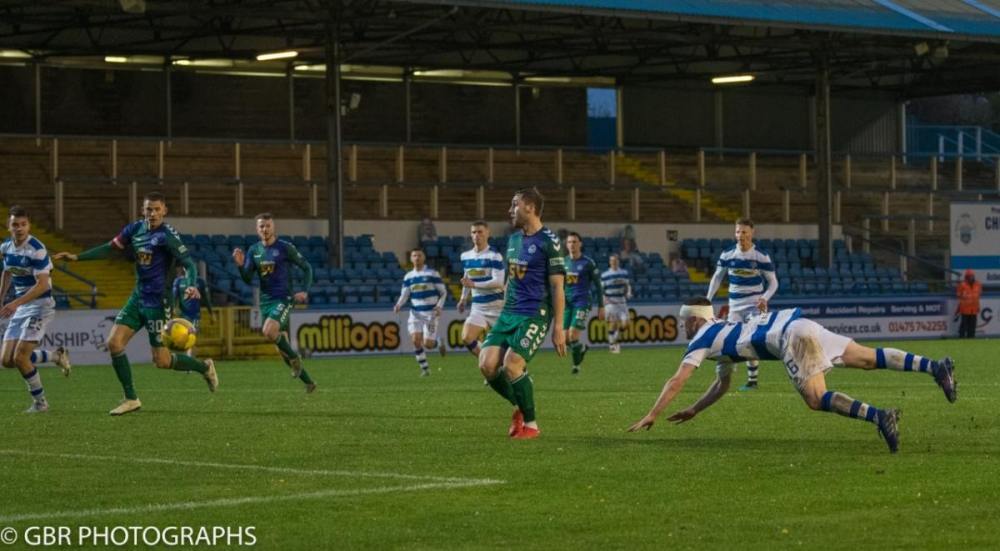 Lewis Stapp heads home Morton's dramatic late winner against Ayr. (Photo- Gary Bradley)
But Morton being Morton, brought us back down to earth with an incredible bump. A visit to Kirkcaldy never seems to bring much joy, and with Raith enjoying a fine start to the season on their return to the division, they dished out a 5-0 hammering to the Ton in what was to prove our heaviest defeat of the campaign. It was Jim McAlister's turn to see red this time, but with the score line sitting at 2-0 at the time, the damage had already been done before the captain walked. The league campaign would take a back seat for a fortnight as international football took centre stage, but before that wonderful night in Belgrade that brought so much joy to the nation, there was the small matter for Morton of a Renfrewshire Derby at New St. Mirren Park in front of the cameras to negotiate, as our League Cup Group Stage campaign resumed. St. Mirren weren't without their own problems at the time, with COVID ravaging their squad and the SPFL hammering them for their own part in their internal outbreak, somewhat unjustly in my eyes. That's the last you'll hear anything sympathetic from me towards them though. Minus their suspended skipper, Morton set up defensively but St. Mirren took until 5 minutes before half time to open the scoring, a Jonathan Obika header finally breaking down our resistance, and a home win looked to be on the cards from there. But a completely different Morton side reappeared for the second half, with the introduction of Kyle Jacobs in midfield allowing us to get more of a grip on the game, and another substitution, that of Ross McIver on the hour, proving crucial. The on-loan Motherwell man netted within seconds of his introduction to secure a draw and head us towards another penalty shoot-out, in which the Saints prevailed en route to a semi-final defeat by Livingston. In a week of penalty shoot-outs, you'd perhaps have accepted Morton's misfortune just this once to see Scotland qualifying so dramatically out in Serbia, but the third penalty competition of the week followed a 0-0 draw in the final group stage game, by now effectively a dead rubber at Firhill. Morton lost their third penalty competition of the season.
And so, it was back to league business, and a truly turgid 0-0 draw with Arbroath. Hopkin's negative tactics had been drawing widespread criticism from the club's fans but on this occasion, it was one of his peers, the Red Lichties' gaffer, Dick Campbell who was scathing in his assessment of how Hopkin had set up to stifle the game, and made very little attempt to win it. As the festive period approached, we welcomed Hearts to Cappielow for the first time in 33 years, and to be honest, there was no chance of Morton ever getting anything from the fixture. Two Jamie Walker goals either side of the break gave Hearts a win that would've been far more convincing had it not been for the performance of Ton custodian Aidan McAdams. 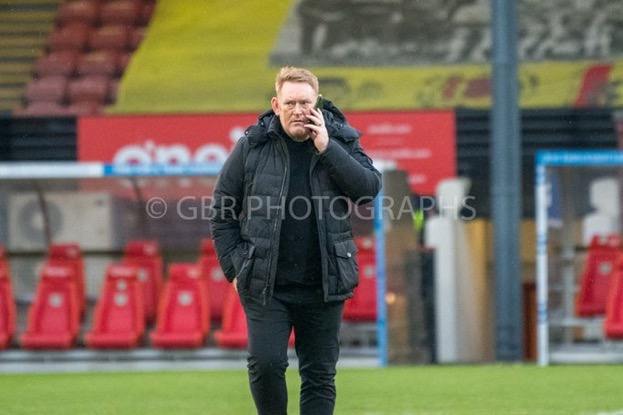 Former Morton Manager, David Hopkin (Photo- Gary Bradley)
There were no great surprises in losing to the Jambos, but a few days later, Cappielow was plunged into chaos as David Hopkin handed in his resignation as first team manager. This was portrayed by the club as a selfless act in order to protect the club in a period of uncertainty, but fooled nobody. Hopkin's incredibly unbalanced squad building, which by this point in the season still left us without a reserve goalkeeper, had come back to bite him. By all accounts, it appeared he had asked for more money to bring in a reserve keeper and been refused, before spitting the dummy and resigning in a fit of rage. It's difficult to pinpoint who is exactly responsible for this ridiculous situation arising, but the board placed their trust in the manager to work with a budget and he made a mess of it. Perhaps they should've been questioning the assembly of said squad, but ultimately the manager has to carry the can for such a shambles. Had they interfered, he would've had every right to point out that assembling the squad and picking the team was his responsibility. That it was, and as a result, his departure was mourned by very few. Hopkin had arrived with great fanfare, and as a Morton fan who had previously managed to bring success to a financially stricken Livingston, appeared the perfect fit to do likewise at his local team. It never happened though, and with the number of rumours of unrest in the background, and subsequent dirty laundry being aired in public, Hopkin's departure was probably good news for all concerned.
There was to be no swift replacement, however. Assistant Manager Anton McElhone took the reins, with the help of senior players Jim McAlister, Chris Millar and Brian McLean. His tenure was to get off to an unexpectedly fantastic start. Under the backdrop of a takeover announcement from fans' group Morton Club Together, it was back to Fife for Morton, just over a month after their 0-5 trousering by Raith, and a completely unexpected 2-1 victory against a Dunfermline side that had recently defeated champions-elect Hearts and appeared nailed on for a play-off place. McAlister's final goal for Morton (more of that one later) and a Craig McGuffie strike sealed the three points in a game in which Morton also had a Kalvin Orsi goal controversially ruled out after it had clearly crossed the line, minutes before Declan McManus equalised from the spot for the Pars. Orsi was to prove the hero the following week, with a brace in a 2-0 home win over Queen of the South as Morton incredibly climbed to third in the table. With such momentum, it was perhaps a shame that the Boxing Day fixture with Inverness fell foul of the weather, and Morton brought 2020 to a close with a 1-1 draw at Somerset Park, which probably should've yielded three points. Aidan McAdams' uncharacteristic error allowed Luke McCowan to equalise after Nesbitt had converted from the spot to give us a first half lead. 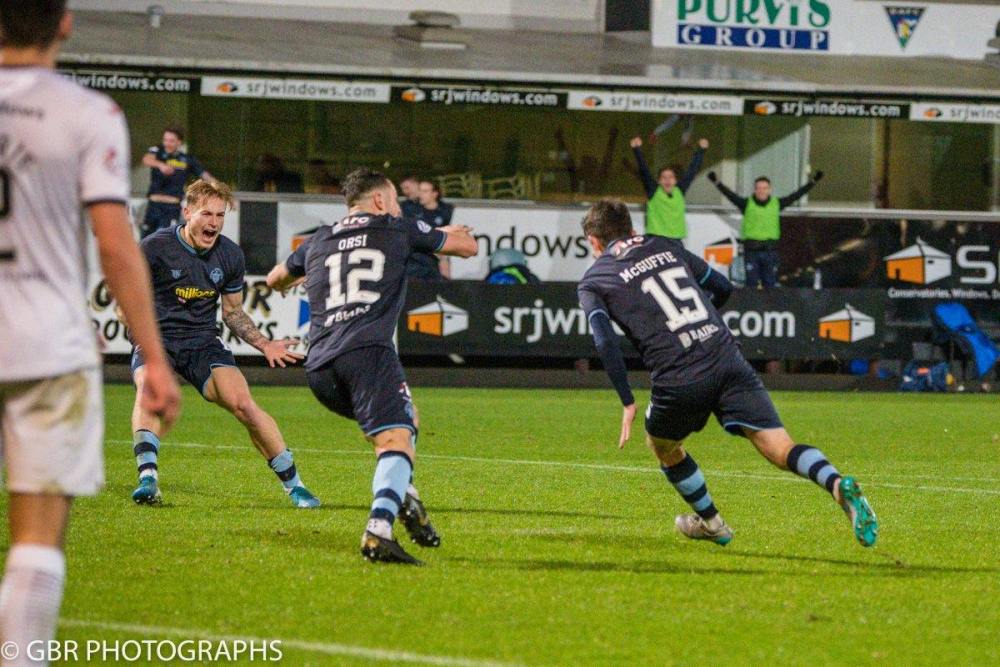 Cammy Salkeld and Kalvin Orsi hail Craig McGuffie's late winner at East End Park. (Photo- Gary Bradley)
But a winter of severe discontent on and off the park was to follow. The terms of the takeover irked a large section of the support- specifically Crawford Rae's intention to retain ownership of Cappielow and the car park for his family and to charge a peppercorn rent. It raised comparisons between Rae and previous owner Hugh Scott and made the chairman public enemy number one in the eyes of the rank-and-file. The proposal also raised questions about the competence of MCT, who appeared far too content to just accept the first proposal Rae gave them in order to get their feet under the proverbial desk without offending the chairman.
As 2020 ended and 2021 began, there were a lot of questions on the lips of Morton fans, and not very many answers coming from the powers that be...
Share
Followers 0