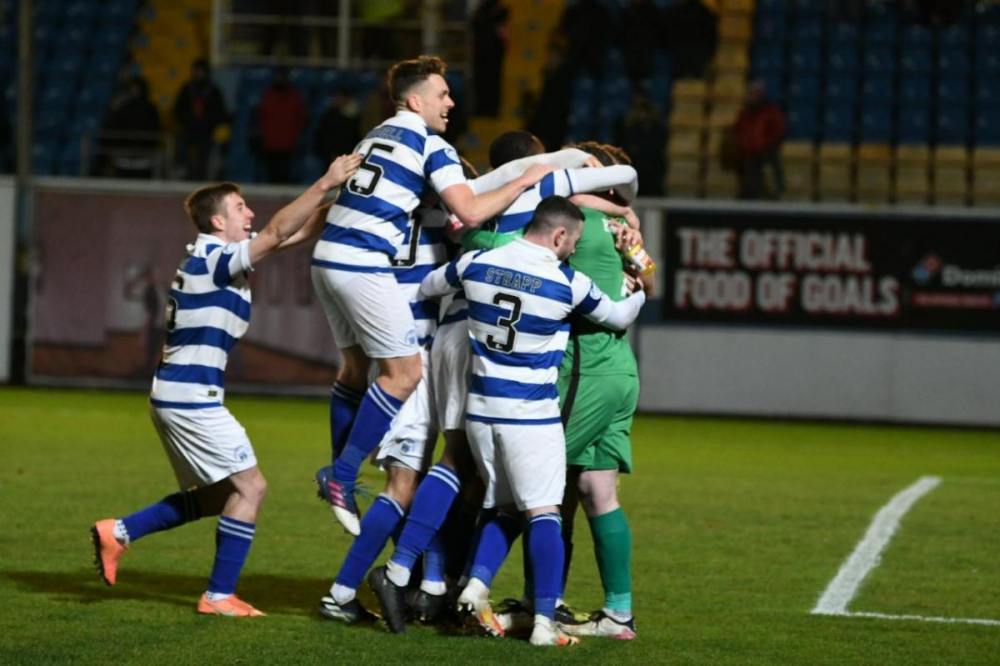 The Axe Falls And A New Broom Sweeps Into Town…

With the league campaign going from bad to worse, Morton’s fans had the welcome relief of a couple of cup ties to distract them from the more pressing of avoiding the drop from the Championship.

The long journey up to Inverness didn’t get the juices flowing for many though, with a paltry 31 fans making the trip for a game that it would be fair to say filled most of the support with trepidation. Those fears however, were to prove unfounded as Morton produced what at this point of the season was an uncharacteristically fine performance in the Highland capital. Having fallen behind to a scrappy Billy McKay strike, Morton were far from overawed and got their reward nine minutes from time, when Gavin Reilly, only 6 minutes after coming off the bench, ended his goal drought in a Morton jersey by getting onto Jack Hamilton’s long ball to skip round Mark Ridgers to secure a replay. It was perhaps telling of the squad’s feelings though that Reilly chose to ignore the fans as he celebrated his landmark finish.

The following Wednesday saw another lengthy trip- this time to Dumfries for the SPFL Trust Trophy quarter-final against fellow league strugglers Queen of the South. With the tournament being Morton’s most realistic opportunity to win a trophy, we could’ve perhaps expected a positive approach from Gus MacPherson heading into the match, so it was probably good for those in attendance that they didn’t get to see the manager’s pre-match interview with BBC ALBA, who were covering the match live. MacPherson’s interview focussed not on how heplanned to win the game and advance in the competition, but on the pre-determined set up of the tournament that saw Morton playing away from home in every round as the 32nd team to be drawn out in the first round. Quite what relevance it had at the quarter-final stage is beyond me anyway, but Gus’s ramblings gave off the air of a man in the dying embers of his reign.

The night didn’t improve from there. An uncharacteristic Jack Hamilton mistake was to give the Doonhamers a first half lead, but it looked as if we’d salvaged a draw and an extra 30 minutes when Alan Lithgow’s late header produced an unlikely equaliser after a truly dreadful Morton performance. Lithgow was to “celebrate” by cupping his ears to the travelling support, further emphasizing the rift between the squad and the support. He had of course, been the subject of a torrent of abuse a few weeks earlier, but it may have been advisable to keep his powder dry as seconds later he was partly culpable as Queens went straight up the park to bag a winner. No sooner were Morton back in the tournament as they were out again. Gus MacPherson’s coat was on an extremely shoogly peg now, as the fans, and finally the board, went into the Ayr United game at Cappielow demanding nothing less than a victory.

What was to follow was actually one of the more entertaining games of the Gus MacPherson era, but an afternoon marred with shame, as Morton hitman Gozie Ugwu was appallingly treated by two cretins in the Cowshed, who decided to abuse him for nothing other than the colour of his skin. What was reassuring was how quickly they were rounded on by those around them, and ejected from the ground. After a thorough investigation, they were issued with lifetime bans from Cappielow, to the surprise and dismay of nobody. But to matters on the park, it was two fine Ugwu headers that were to provide the goals for Morton on the day, but an excellent Steven Bradley strike and Tomi Adeloye’s goal had looked to give the Honest Men the points before Ugwu’s second goal. 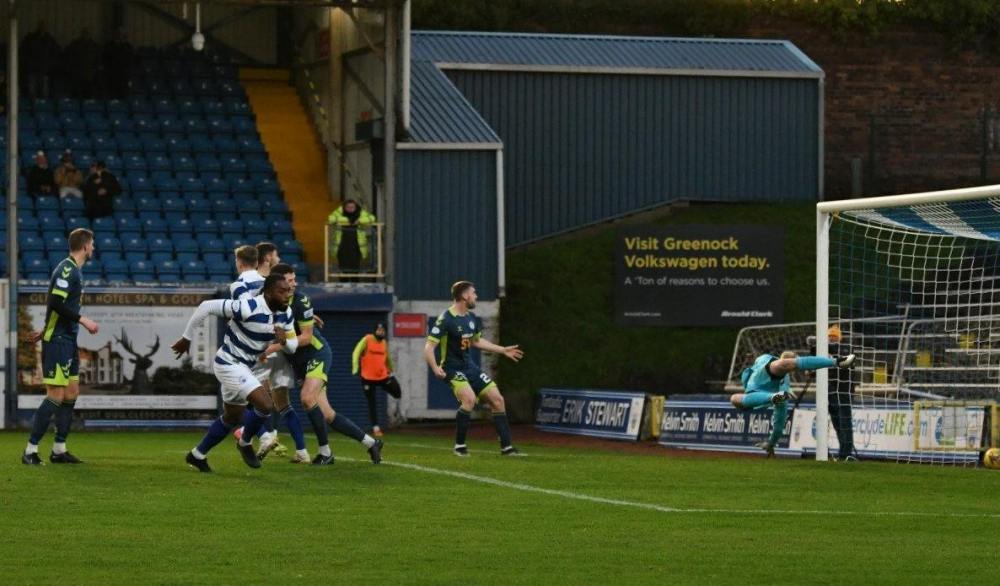 Gozie Ugwu's double gained a point at home to Ayr as the Gus MacPherson era came to an end. (Photo-Gary Bradley)

Enough was enough, and as we left into the Greenock night, it was barely 5pm by the time messages were coming through that MacPherson had been relieved of his duties and had swiftly left the stadium. One suspects that an ultimatum had been given to the boss that nothing less than three points would have done against a struggling Ayr side, and the search for a new boss began. 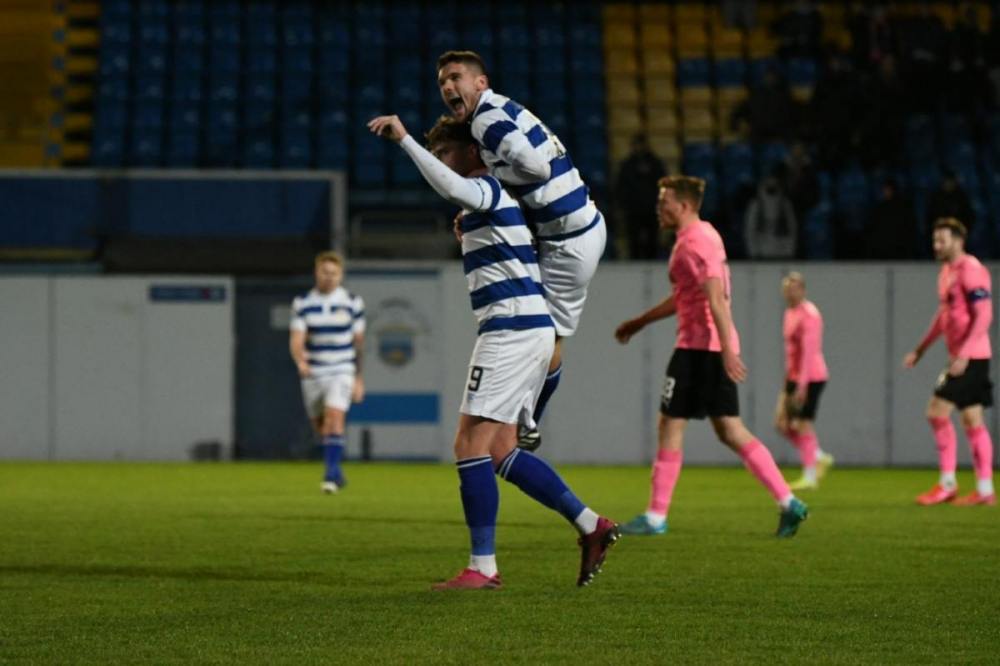 Robbie Muirhead made it clear he was less than impressed with the Cowshed's backing after opening the scoring against Inverness in the cup replay. (Photo-Gary Bradley)

Derek Anderson was put in caretaker-charge for a Cappielow double-header against Inverness in the cup replay and the league with Morton in turmoil behind the scenes. On the park though, it was to be another credible performance as the Caley Jags came down twice in five days, firstly for the cup match. Robbie Muirhead was to be the target of the support on this occasion, having not enjoyed his most productive of evenings until the point he curled Morton into the lead a couple of minutes before the break. Rather than express his joy at producing such a fine strike, he was to take the lead from his captain the previous week and express his disdain for the home support. Again, there was to be a quick-fire counter, with Danny Devine bagging Thistle’s equaliser a couple of minutes after the break. However, on this occasion, we did have a happy ending. With no extra time, it was straight to a penalty shoot-out, and Devine provied to be the Highlanders’ fall guy, as Jack Hamilton’s fine save took Morton through to a fourth-round meeting with familiar foes Motherwell 5-4 after nine flawless spot kicks. 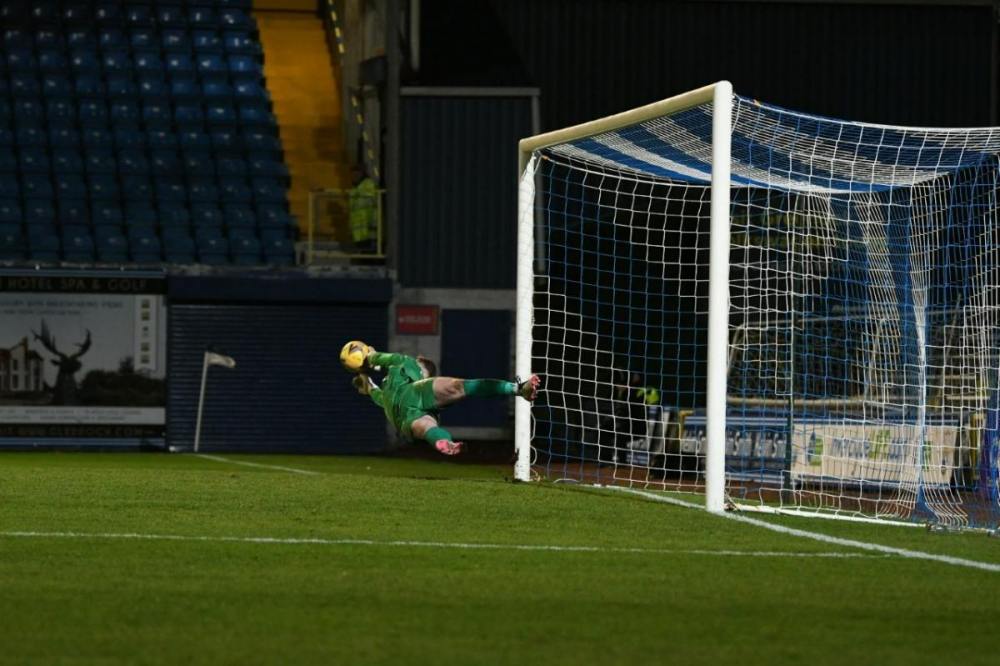 But it was to be a different story when Inverness came back down the road a few days later. Visiting boss Billy Dodds had been extremely critical of the temporary changing facilities provided for his team in midweek and was accommodated far more than he should’ve been for his outburst as arrangements were made for his side to use the gym between the Cowshed and Sinclair Street terraces. They were to take out their frustrations after that cup defeat by annihilating Morton 6-1, our biggest defeat at Cappielow since Ayr United’s 6-0 victory over a Morton side in the throes of administration way back in January 2001. Maybe it wasn’t Gus’s fault after all?

With an appointment apparently imminent, Anderson took charge of his final game as caretaker against high-flying Arbroath at Gayfield. A much-improved performance saw another hard luck story against the Red Lichties though, with Jack Hamilton’s brother Colin again netting the opener before being clawed back by a Gary Oliver counter as the Angus fog thickened and the match looked under serious threat of abandonment. Unfortunately though, it was to finish with Falkirk loanee Anton Dowds doing what no other Falkirk player has managed in an awful long time by netting a winning goal against Morton, taking Arbroath to the top of the table in the process. 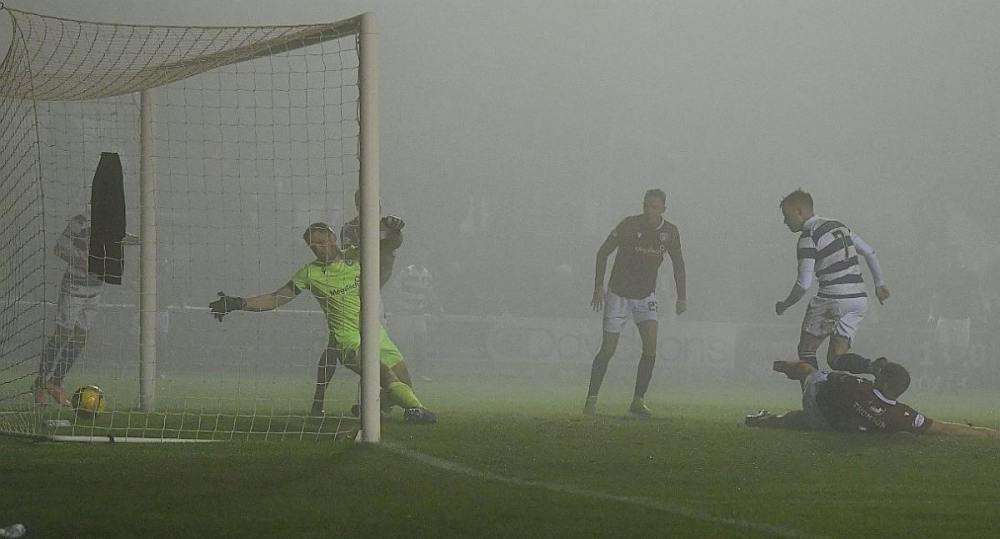 A Gary Oliver equaliser wasn't enough to gain a share of the spoils at a foggy Gayfield just before Christmas. (Photo- Gary Bradley)

The festive period was to prove eventful off the park- with the new Omicron variant of COVID hitting the world hard, the Scottish Government decided to take action to quell the problem. Crowds across the country were restricted to a maximum of 500, regardless of capacity or the amount of open-air space at grounds. With games against Queen of the South and Dunfermline over that time, the c. 1000 season ticket holders were allocated a game each to attend, with Morton’s hands tied behind their back by the restrictions.

But the news we did want to hear finally arrived- the appointment of Morton’s new boss- former player, and First Team Coach to David Martindale at Livingston; Dougie Imrie. It was to be an unexpected and risky appointment, having seen the board go with the tried-and-trusted Gus MacPherson previously. Without the opportunity to bring his own staff in, Imrie was thrown into the lions' den, and immediate results were demanded as soon as possible. Not only that, but he also had to fix what appeared to be an increasingly fragile relationship between the players and their supporters. 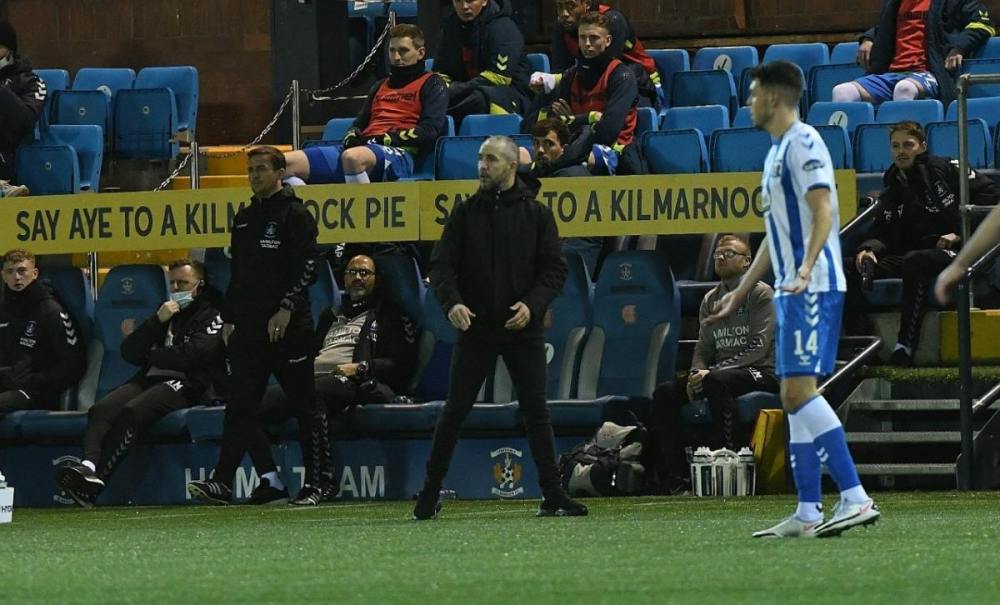 The new boss gets to work by taking his beleaguered squad to title favourites Kilmarnock for his debut on the touchline. (Photo-Gary Bradley)

Imrie’s debut in the dugout was delayed by a COVID outbreak in the Queen of the South squad though, as the pandemic probably did Morton’s bean counters a favour and gave Imrie a bit more time to work with his new charges before he did debut on the touchline at title favourites Kilmarnock just before the new year.

Things weren’t to start well, with Rory McKenzie’s fine strike giving Killie a first half lead and Morton thankful for Jack Hamilton’s incredible performance between the sticks in front of only 500 of the Ayrshire club’s support. But with Mark Russell having a torrid time at left back, Imrie did what we’ve not seen in long enough by taking the necessary action in replacing him with Lewis Strapp. Strapp wasn’t to look back under the new gaffer, but in the short term, we were to get out of Rugby Park with a precious point as Alan Lithgow headed home an excellent corner from the substitute. In the end, some Morton fans were disappointed that we were happy to keep possession in the corner late on with Killie having been reduced to ten men. 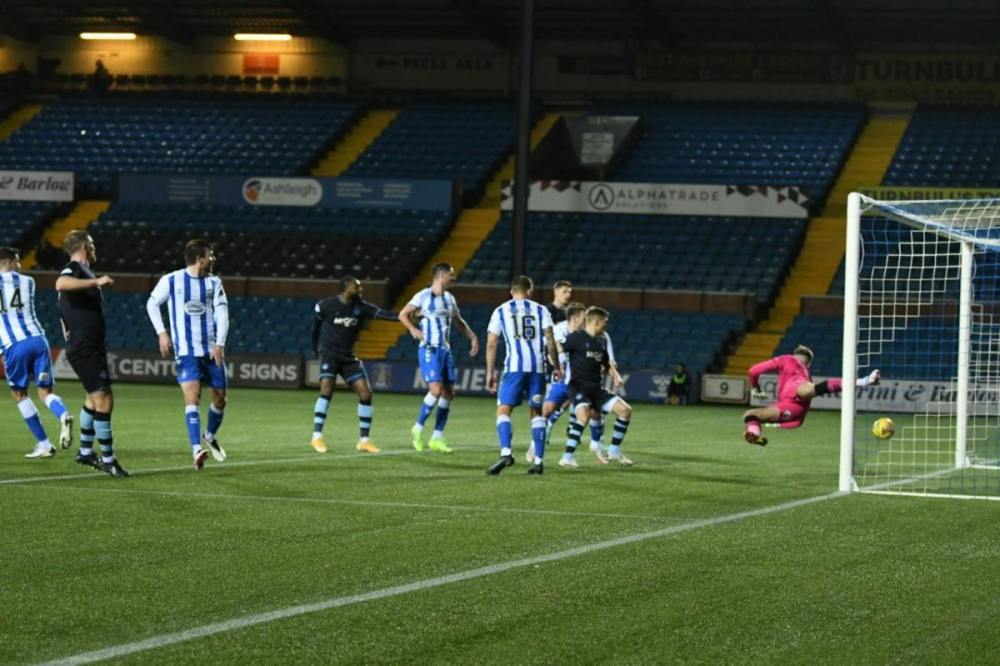 Alan Lithgow's second half header gained an unlikely point as the Dougie Imrie era got off to a promising start. (Photo-Gary Bradley)

Make no mistake though, those first steps were a point gained, rather than two points dropped. Perhaps there was some light at the end of the tunnel…