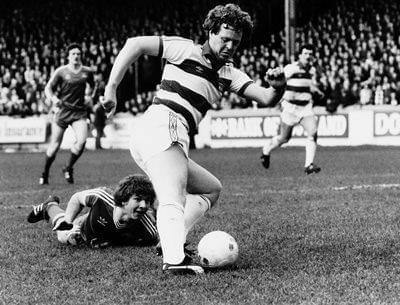 (Photo- Source Unknown)
Five of the Best- Scottish Cup Upsets
by Russell Gordon
The Scottish Cup. Quite simply the greatest competition in sport, never mind football. And with Morton's involvement in this season's competition starting (and most probably ending) this weekend, we can still at least dream of Kyle Jacobs leading the lads up the stairs at Hampden on the 21st of May to repeat the feat of their predecessors from a century previous.
Whilst the greatest upset in Morton's history took place on 15th of April 1922 on Glasgow's southside, that's a topic for the anniversary, so we'll first wander back a mere 74 years to the 1947/48 season;
Celtic 0-1 Morton, 27th March 1948. Semi Final.
Most Morton fans will be aware that our only "other" appearance in the Scottish Cup Final was against Rangers in 1948, when we eventually succumbed to a replay defeat in fading light at Hampden in front of a record aggregate crowd for a final. But how did we get there?
Morton's run to the semi final was relatively straight forward, with routine routs of minnows Ayr United, Falkirk, Queen's Park and Airdrieonians before being drawn to face Celtic at Ibrox in the last four. Admittedly, this was a Celtic team who finished 12th in a 16-team league that season, only a point and two places above Morton, who just avoided the drop. 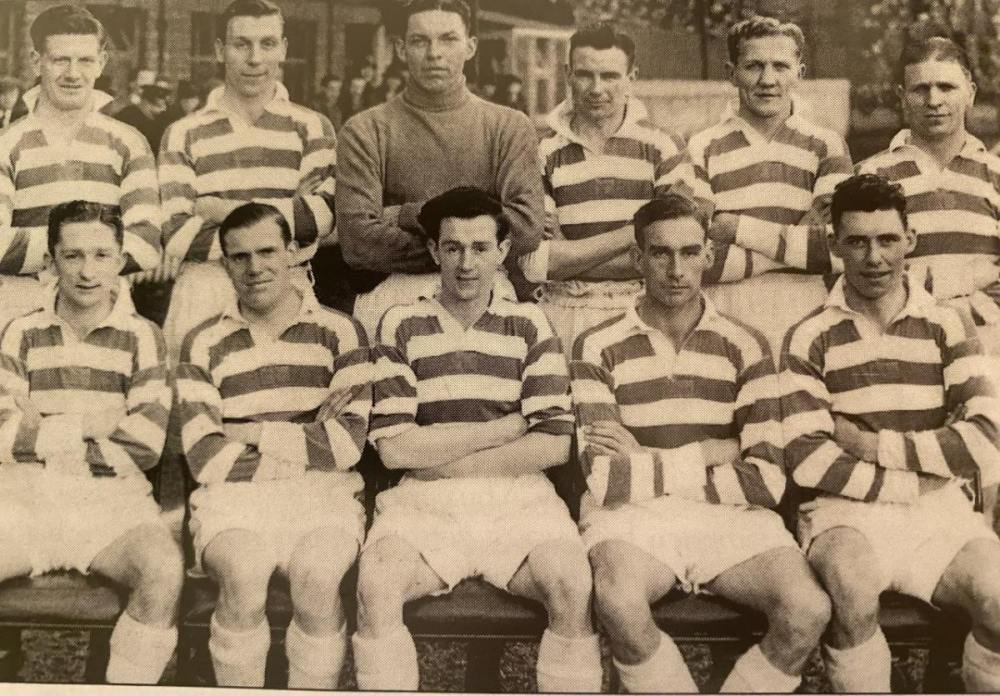 The class of '47/48 who disposed of Celtic on the way to the club's second Scottish Cup Final.
(Photo- Greenock Morton 1874-1999, Vincent P Gillen)
But Morton headed into the tie minus two key players, with Johnny Divers and the legendary Tommy Orr missing out. According to Vincent Gillen's Greenock Morton 1874-1999, the critics were said to believe Morton had "no chance". They were replaced by young Eddie Murphy and Tom McGarrity, and it was Murphy who proved to be the hero. After a stalemate in ninety minutes against overwhelming favourites, he was to net a dramatic winner from 14 yards past the despairing Celtic keeper Willie Miller in the first period of extra time to empty the Glasgow side from the tournament. A story with some striking parallels to a League Cup tie some 65 years later, come to think of it. Quite how many corners Celtic made a complete hash of in that semi final is something I can't confirm, unfortunately.
Morton 1-0 Aberdeen, 14th February 1981. Fourth Round.
As with the tie against Celtic in 1948, there wasn't as much between the two clubs as there is in the modern era. Unlike that semi final, this was a clash of two extremely good football teams. Aberdeen were the champions of Scotland at the time, and although Morton were to finish just above the drop zone, we'd bite the hand off anyone offering us eighth in Scotland's top flight now.
Dons' Manager Alex Ferguson's hoodoo against the 'Ton was well publicised at the time, and Morton had in fact gone to Pittodrie a week previous and recorded a 1-0 win. But Cappielow perhaps saw its greatest day on Valentine's Day 1981 as Andy Ritchie's incredible 20th minute goal, which saw him plant the despairing Ian Considine on his backside before delicately placing the ball beyond Scotland keeper Jim Leighton as his international teammates Willie Miller and Alex McLeish could only look on in awe at the sheer brilliance of the control and finish.
McLeish was involved at the other end as he nodded down for Andy Harrow to fire a low volley which was brilliantly turned round the post by Roy Baines. And Baines was also to deny former Morton striker Mark McGhee on a couple of occasions, with McGhee's complaints earning him a place in the book as he claimed Baines had fouled him. As someone who was two young to enjoy this particular match, I can only hope that the Cowshed were as sympathetic to McGhee's protests as our own generation would likely be.
The final whistle was met with rapturous applause from the home support as Morton progressed to a quarter final with Clydebank, winning 6-0 at Kilbowie after a 0-0 draw at Cappielow, before falling to Rangers in a controversial Celtic Park semi final for which the mercurial Ritchie was dropped from the starting eleven, but still managed to convert a penalty in the 1-2 defeat. Aberdeen on the other hand, would win the next three Scottish Cups and put paid to Real Madrid in the Cup Winners Cup Final of 1983, which goes a way to show the magnitude of Morton's achievements in regularly troubling Scotland's best side of that era.
Probably Cappielow's finest ever goal, on perhaps Cappielow's finest day, from Morton's finest ever player. There were however to be other great Cappielow strikes as Morton disposed of supposedly more illustrious opposition in years to come.
(Video- Leon Mooney)
Morton 2-1 Dundee, 23rd January 1999. Third Round.
Morton had dispatched of the Dees only two seasons previous en route to a quarter final showdown with Kilmarnock, but this time around were a division below their big spending opponents, who had been promoted to the newly formed land of milk and honey of the SPL as champions in 1998. But with the introduction of a winter break in Scotland's top flight, the Dens men were caught cold by a Morton side who came out the traps with two first half goals to seal the tie.
The game had, however been in doubt, as a power failure at Cappielow led to a 35-minute delay to kick off. But the wait was to prove worthwhile, as Owen Archdeacon's rasping 30-yard strike had future Scotland keeper Rab Douglas grasping at thin air on the half hour, before Ross Matheson's close-range finish doubled Morton's advantage. Eddie Annand reduced the arrears, but it was to no avail as the Ton progressed to a fourth round tie with Clyde. A 6-1 rout of the Bully Wee ensued before Morton fell to Celtic in a live TV quarter final at Cappielow, Henrik Larsson and co. managing to do what the Bhoys of '48, and indeed '13, couldn't.

Ross County 1-2 Morton, 25th January 2003. Third Round.
With Ross County in the First Division back in 2003, this result may not be one that would immediately raise too many eyebrows, but this was a massive boost for a Morton side struggling for consistency as they tried to negotiate their way out of Scotland's bottom tier after Hugh Scott's disgraceful neglect and the subsequent administration had seen Morton relegated in consecutive seasons.
Having already disposed of eventual Highland League winners Deveronvale 4-3 at Cappielow in a second round tie that wasn't without it's scares, around 600 Morton fans travelled up the A9 and found themselves singing in the rain as the 'Ton felled County by two "Super" Alex Williams strikes to a David Winters counter. Williams also found time to miss a second half penalty, but it wasn't to dampen the spirits of the sodden Morton faithful who had plenty to celebrate as they descended to their buses and to the Mallard to toast what really felt like the club's first real positive step on the road to recovery.
We would of course win the league that season, but the cup campaign was to go no further than a disappointing 0-2 home defeat by Stranraer. However, in spite of how sadly it all ended for Williams, we've never seen an out and out goal scorer like him since. Often folk think what might have been, but what memories he did give us.

Morton 3-1 Kilmarnock, 7th January 2007. Third Round.
What is it about Cappielow, cup shocks and absolutely incredible goals? Move over Andy Ritchie, get out the way Owen Archdeacon, and step forward Chris Templeman.
Jim Jeffries' Killie side rocked up at Cappielow for a tie that brought back memories of a number of cup disappointments against the Ayrshire side in the 90s, with Morton exiting the '94, '95 and '97 tournaments at home to Kilmarnock. But with two divisions separating the sides, this was to be Morton's turn.
Morton had led the Second Division from the first day to the last, and taken care of East of Scotland League Annan Athletic in the previous round to set up a mouth-watering tie in front of a raucous crowd which created a crackling Cappielow atmosphere. After a first half stalemate, it was Kilmarnock who took the lead- Colin Nish netting a beautiful volley from Garry Hay's cross on the left two minutes after the break. From there on, it was all Morton though, with Templeman at the centre of everything. He was to find himself unfortunate not to score on a couple of occasions before finding himself on the end of a sweeping move that his own good defensive work had started. His deflected effort found a way past Graeme Smith in the Killie goal to level the affair just after the hour. The game was turned on its head 7 minutes later as Templeman took Chris Millar's cross on his right foot before acrobatically volleying Morton into the lead with his left. Cue utter bedlam.
The often clumsy and awkward journeyman, who Morton had paid an eye-watering fee for two years previous, turned in the performance of his life and should've had a penalty after being scythed down by Gordon Greer. Fortunately referee McCurry waved play on and within seconds, Jim McAlister laid the ball on a plate for Paul McGowan to extend Morton's lead and send us through to a fourth round tie at Fir Park.
Morton would lose that tie 0-2 to the Steelmen in front of a massive travelling support, but it's amazing how many people in their twenties you hear describing the Kilmarnock game as their first Morton match. There can't have been too many times the club have got folk hooked in the last generation or so, but that was certainly one of those days. And for a guy who would become a school janitor in later life, I'd like to think that Chris Templeman has a story or two to tell some wide-eyed school kids about the day he turned into Pele.

There won't be too many expecting a glorious cup run this term, but let's not kid ourselves, the thrills the Scottish Cup provide are exactly why we love football. Be it a day out at an unfamiliar non-league club like Turriff or Beith, a brilliant shock like Kilmarnock and Aberdeen at Cappielow, or even the shame of defeats at places like Peterhead and Spartans, the possibilities the tournament provides are endless, even for a club of our size.
Hopefully one day...
Share
Followers 0