The club is on autopilot. Same as it ever was. I don't blame the guy, I blame the club for outsourcing this vital piece of club strategy and then ignoring it.

It's worse than autopilot, it's active neglect. Look at what other clubs have been doing during the lockdown on social media - Hearts, Raith, Falkirk and a few other clubs have launched next season's home kit through their social media feeds. Hibs and Partick (IIRC) have been rerunning old matches and asking supporters to pay for tickets for these matches. Stenhousemuir have used their social media to promote and advertise all the excellent voluntary work their Community branch have been doing. Even the likes of Berwick Rangers have been promoting their (excellent) sponsorship and social media packages. They offer sponsorship of their YouTube output for £500 a season, which makes you wonder how much a club of our size could make from a similar enterprise.

What have we done in this period to generate income during this period? MacKinnon came on board and was given a simple mantra - breaking even. We should be attempting to maximise revenue, and more importantly cash flow, during this period. Our failure to do so is completely unacceptable.

Our social media presence and output has regressed, potentially fucking over a club employee along the way. What have we gained from the new arrangement? I've yet to see a tangible benefit for the club. It's been a mixture of incompetence, poor decision making and neglect from the people tasked with ensuring the club survive the pandemic.

We can't expect every single player who plays for the club to support Morton, but as mentioned at least McAlister doesn't bullshit about it for his own personal gain.

I know it’s contentious on this forum to suggest full backs could be used as wide mids/wingers, but... Iredale and Strapp as a pairing on the left?


Even in a fucking lockdown we're still getting this shite. I give up.

- The anniversary of the Dumbarton game in 1995

- The anniversary of the Peterhead game in 2003 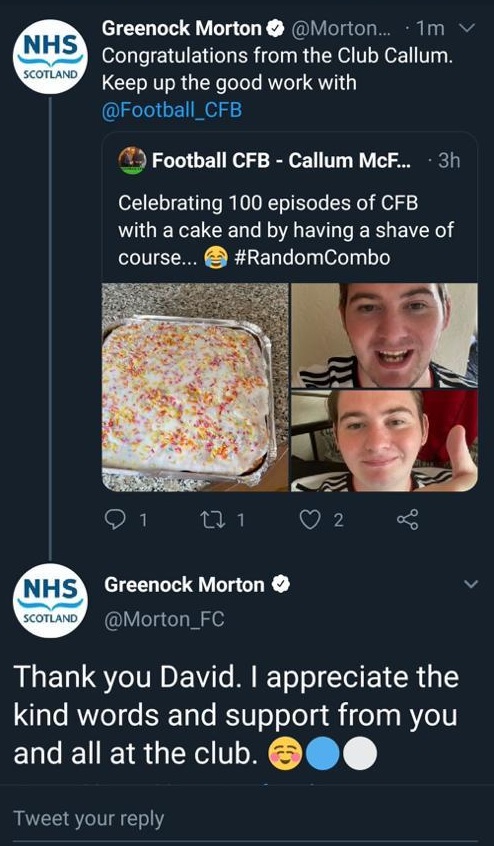 It is also worth noting that the club Twitter launched a POTY and YPOTY vote the day after MCT announced theirs, and had theirs close the day before MCT's vote closed. I can't remember the club ever running a POTY vote before, let alone solely through Twitter.

If for whatever reason we didn't create a phoenix club, I couldn't bring myself to support another football club.  Especially not gobshites like the Juniors. As much as I enjoy doing a spot of groundhopping when the opportunity presents itself, doing that constantly seems a bit sad and empty. I've got no fucking idea what I'd do.

I've never met a Partick Thistle fan who isn't completely up their own arse. They have an unbearable fanbase with some serious delusions of grandeur.

Imagine being so desperate for attention and relevance that you insist on returning time and time again. Did you get bored of talking to yourself on your forum?

I think the LinkedIn update shows just how tactless Callum is being. Giving it the full 'big bad Morton fans' routine on his blog while updating his CV and public profile to put his voluntary role front and centre, meanwhile a club employee is sitting on his thumbs sweating about his future. MacKinnon should never have let this happen in the first place, he deserves just as much criticism as the opportunist who accepted the role. I also know of at least two people who have contacted MacKinnon regarding this situation to no avail.

Get it voted on and approved. Get fucking down.

We already knew you were an utter cunt, but thanks for giving us official confirmation.

- The 'smelly wee wank in the crowd' thread.

- Salty proclaiming he got his hole.

Have I missed anything?

One of the Falkirk fans who ran on the pitch in the 1-1 draw at Cappielow has been given an 18 month football banning order and a 4 month 7pm-7am curfew, enforced by an electronic tag. He is also banned from attending any public house displaying football for the duration of his ban.

He's currently 17, meaning he won't be able to go to the pub on his 18th birthday if there's football on the TV. Outstanding