This poll suggests that only 1in5 want another referendum and that in the event of one the no vote would win by a bigger margin than last time.

Can anyone stomach the idea of another referendum this soon?

Where to start with that poll, commissioned for Scotland in Union?  34% don't want another indyref, says the headline.  Hmm, what does that imply about the percentage who do want another referendum?  Note that the votes for an indyref have been subdivided according to which year people want it, thus making it look like 34% is the winner - it isn't.  Basic distortion.

Regarding the £:  When Brexit kicks in, the £ will fall further - I can remember it being $2.40 in my lifetime and its slump has been inexorable, also against the Euro.  A Scottish currency (which we could call the £ - we already have the banknotes) would appreciate against the £ sterling as we have massive natural resources to underpin it, and that is what terrifies the unionists.  They tell us we're poor and try to frighten us, when it is actually they who should be, and are, frightened.  I am relaxed about currency, £ sterling, £ Scots, Euro, whatever, and anyway I rarely use currency now as everything is electronic and seamless.  I quite like the Euro as it seems to work fairly well, so if you want stability rather than a currency that is going to gain strength, that might be a good shout.

If there is any truth in that 51/49 poll, it makes excellent reading as campaigning hasn't even begun.  Demographics and campaigning will only see the figures moving in one direction; throw in Brexit kicking in, if it ever does, and the die is cast.  No wonder Ruth the Mooth is threatening to block indyref despite having no say in the matter - she is shiting herself.  The BBC is doing its best to promote her though with that recent puff piece headlining Reporting Scotland, and the BBC's coverage of the SNP conference being almost non-existent.  It's just a matter of which is going to crash and burn first - Falkirk, Therangers, or the union.  Get the popcorn in.

"Any nation given the opportunity to regain its national sovereignty and which then rejects it is so far beneath contempt that it is hard to put words to it."

So it looks like The Gammon Party are taking most of the English seats while the SNP have won every declared seat in Scotland so far. Inverclyde have just declared an SNP victory. Tommy Robinson getting less than 5% in Burnley and the UKIP leader losing his seat.

You address me by my proper title, you little bollocks!

Fuck, I'm too busy debating some hairbrained idea and I forgot all about the EU elections.

We love the winter, it brings us closer together. 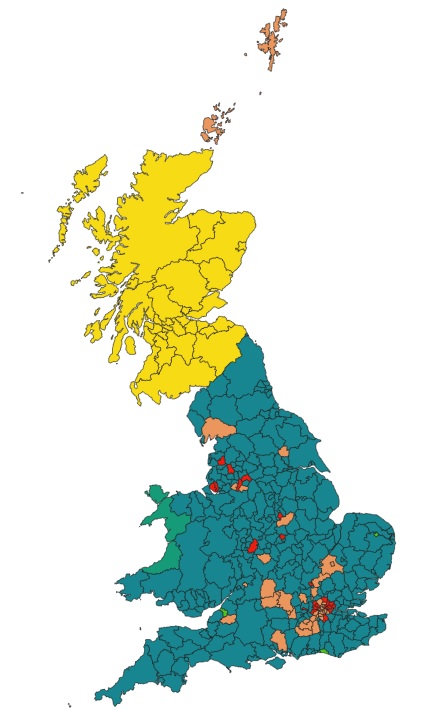 The biggest difference between Scotland and the UK is how we vote. This is just another example of why Scotland needs autonomy from the UK. In what way does it benefit the Scottish electorate to remain in the power of voters outside our borders?

Peter Weatherson is the greatest player since Ritchie, and should be assigned 'chairman for life'

Back to General Nonsense
Reply to quoted posts     Clear